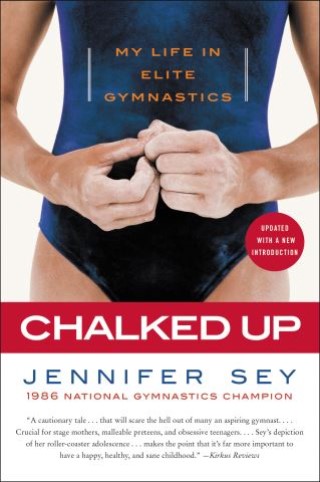 My Life in Gymnastics

Updated With a New Introduction

“I am grateful to Jennifer Sey for sharing such an honest account of her experiences as an elite gymnast. She has eloquently and fairly exposed a dark side to our sport that parents have long needed to be made aware of.”

Fanciful dreams of becoming the next Nadia Comaneci led Jennifer Sey to become a gymnast at the age of six. Her early success propelled her family to sacrifice everything to help her become, by age 11, one of America’s elite. But as she set her sights higher and higher, Jennifer began to change, setting her needs, her health, and her well-being aside in the name of winning. And the adults in her life refused to notice her downward spiral.

Now, Sey reveals the tarnish beneath her gold medals. A powerful portrait of intensity and drive, eating disorders and stage parents, abusive coaches and manipulative businessmen, Chalked Up is the story of a young girl whose dreams would become subsumed by the adults around her.

The 1986 national gymnastics champion and a seven-time U.S. National team member, Jennifer Sey is a graduate of Stanford University. A mother of four children, she lives in San Francisco and produced the documentary, Athlete A.