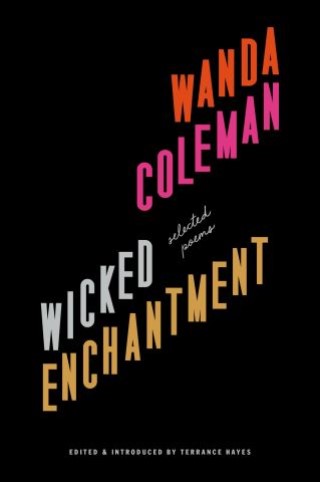 A voice for justice, anti-racism, and equality—here is the greatest and most powerful work of the people’s poet, Wanda Coleman.

Coleman was a beat-up, broke, and Black woman who wrote with anger, humor, and clarity. Wicked Enchantment: Selected Poems is a selection of 130 of her poems, edited and introduced by Terrance Hayes. Rejected by the elites during her lifetime, here’s what people are saying now:

—One of the year’s best! “These poems are wildly fun and inventive . . . and frequently hilarious; they seem to cover every human experience and emotion.”—New York Times

—“One of the greatest poets ever to come out of L.A.” The New Yorker

—One of the year’s best! “Fantastically entertaining and deeply engaging...potent distillations of creative rage, social critique, and subversive wit.”—Washington Post

—“Her work pushes us to confront injustice with as much candor as she did.”—Poetry

A self-made writer from Black Los Angeles, Wanda Coleman made art while living every day with racism, poverty, violence. Her triumph is in words that endure. It’s time for Coleman’s courageous, impassioned, inspiring, one-of-a-kind voice to reach readers everywhere.

Wanda Coleman—poet, storyteller and journalist—was born and raised in South Central Los Angeles. Coleman was awarded the prestigious 1999 Lenore Marshall Poetry Prize for Bathwater Wine from the American Academy of Poets, becoming the first African-American woman to ever win the prize, and was a bronze-medal finalist for the 2001 National Book Award for Poetry for Mercurochrome. Wicked Enchantment: Selected Poems is the first new collection of her work since her death in 2013.