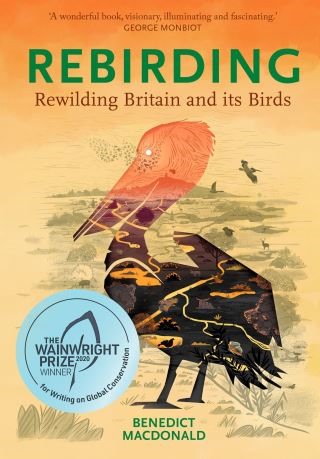 Rewilding Britain and its Birds

WINNER OF THE WAINWRIGHT PRIZE FOR WRITING ON GLOBAL CONSERVATION

Rebirding takes the long view of Britain’s wildlife decline, from the early taming of our landscape and its long-lost elephants and rhinos, to fenland drainage, the removal of cornerstone species such as wild cattle, horses, beavers and boar – and forward in time to the intensification of our modern landscapes and the collapse of invertebrate populations.

It looks at key reasons why species are vanishing, as our landscapes become ever more tamed and less diverse, with wildlife trapped in tiny pockets of habitat. It explores how Britain has, uniquely, relied on modifying farmland, rather than restoring ecosystems, in a failing attempt to halt wildlife decline. The irony is that 94% of Britain is not built upon at all. And with more nature-loving voices than any European country, we should in fact have the best, not the most impoverished, wildlife on our continent. Especially when the rural economics of our game estates, and upland farms, are among the worst in Europe.

Britain is blessed with all the space it needs for an epic wildlife recovery. The deer estates of the Scottish Highlands are twice the size of Yellowstone National Park. Snowdonia is larger than the Maasai Mara. The problem in Britain is not a lack of space. It is that our precious space is uniquely wasted – not only for wildlife, but for people’s jobs and rural futures too.

Rebirding maps out how we might finally turn things around: rewilding our national parks, restoring natural ecosystems and allowing our wildlife a far richer future. In doing so, an entirely new sector of rural jobs would be created; finally bringing Britain’s dying rural landscapes and failing economies back to life.

Benedict Macdonald is a conservation writer, wildlife television producer and a keen naturalist. He is passionate about restoring Britain's wildlife, pelicans included, in his lifetime.

During his extensive global travel experience, Benedict has found inspiring examples of why desecrating our country’s ecosystems is both entirely avoidable and against the national interest. This book is his attempt to ensure that this generation, for the first time in thousands of years, leaves Britain’s wildlife better off, not worse, than the generation before – for wildlife and people alike.

Benedict is a long-time writer for Birdwatching magazine, as well as a contributor to the RSPB Nature’s Home and BBC Wildlife. He has been fortunate to work on TV series for the BBC and Netflix - most notably the grasslands and jungles programmes of Sir David Attenborough’s conservation series Our Planet.