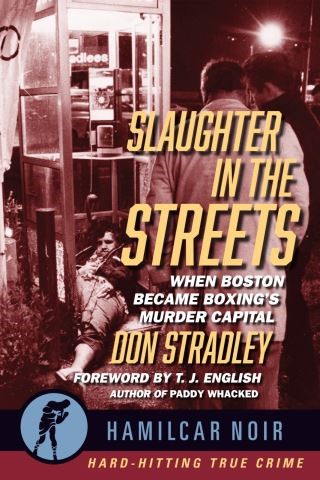 Slaughter in the Streets

"The historical fact that the city of Boston has seen more than its share of this breed – boxers who became intertwined with the criminal underworld – is the literary gold that author Don Stradley mines so beautifully in this book. There are moments of triumph in the ring, and some failures; Stradley is right to focus as much on the boxing careers (often misbegotten) of these men as well as their criminal associations and habits."—T.J. English, from the Foreword

From the pages of Slaughter in the Streets: When Boston Became Boxing’s Murder Capital...

Frankie spent the final seconds of his life the way James Cagney might’ve in an old Warner Bros crime drama: he stumbled down the hallway and into the office of an attorney who had leased space in the building. A female stenographer who had been at her desk filling out Christmas cards looked on in horror; the sound of guns a moment earlier had shattered the holiday mood, and now she was confronted by the sight of Frankie in the doorway, blood gushing from his wounds. Without saying a word, he walked in and sat in a chair. Then he pitched forward, dead.

In Slaughter in the Streets, Don Stradley masterfully unfolds the story of how Boston became "boxing's murder capital." From the early days of Boston's Mafia, to the era of Whitey Bulger, Stradley tells the fascinating stories of men who were drawn to the dual shady worlds of boxing and organized crime.

Boston was once a thriving boxing city. And it was also host to an ever-expanding underworld. From the early days of Boston's Mafia, to the era of Whitey Bulger, many of the city’s boxers found themselves drawn to the criminal life. Most of them ended up dead. Slaughter in the Streets tells the violent and often tragic story of these misguided young men who thought their toughness in the ring could protect them from the most cold-blooded killers in the country.

Don Stradley: Don Stradley is the author of Berserk: The Shocking Life and Death of Edwin Valero (Hamilcar Publications), Slaughter in the Streets: When Boston Became Boxing's Murder Capital (Hamilcar Publications), Fistful of Murder : The Fights and Crimes of Carlos Monzon (Hamilcar Publications), Schooled, a dual biography of Lebron James and Jim Morris (Scholastic), and a chapter in The Ultimate Book of Boxing Lists by Bert Sugar and Teddy Atlas. Stradley is an award-winning writer whose work has appeared in publications, including The Ring, Ringside Seat, and ESPN.com. Along with his boxing coverage, he's written about baseball, NASCAR, and professional wrestling. When not writing about sports, he's written about the movies for such magazines as Cinema Retro and Noir City.