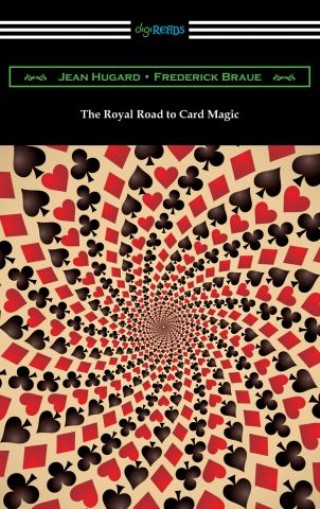 The Royal Road to Card Magic

Written in 1948, “The Royal Road to Card Magic” by Jean Hugard and Frederick Braué, is an important and classic beginner’s guide to over 100 different card tricks. Jean Hugard, born John Gerard Rodney Boyce in Queensland, Australia in 1872, began his professional career as a magician in 1896, eventually moving to America in 1915, where he worked in vaudeville and as a stage magician. He retired from performing professionally around 1930 and began a prolific and successful career writing books on magic. As he became older and lost his eyesight, the magician Frederick Braué began co-writing several books with Hugard on the art of card magic. Braue was a journalist and semi-professional magician who specialized in card tricks and was viewed as a master at this skill. In their book “The Royal Road to Card Magic” they bring their considerable knowledge and experience to teach beginners how to master an impressive number of famous and difficult card tricks. Complete and easy-to-understand instructions are included for such tricks as false shuffles, the guide, the pass, the classic force, and many, many more. This timeless guide is an important book for anyone looking for an introduction in how to master card magic.