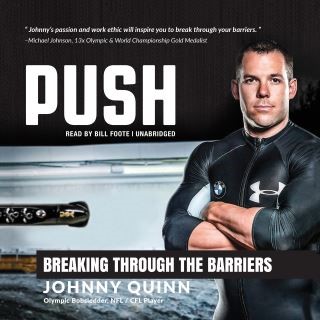 Breaking through the Barriers

Johnny Quinn shares his “wild dream” of playing in the NFL, being crushed after getting cut three times, losing $2.6 million in contracts, and blowing out his knee. At age thirty, when most professional athletes are considered “over the hill,” Johnny was competing for Team USA in the sport of bobsled at the 2014 Winter Olympics in Sochi, Russia.

This book ushers readers through the valleys of life to the thrills of rocketing down icy mountains at 80+ mph with no seat belt. Discover how the author overcame failure on the road to achieving greatness.

From an NFL failure to a US Olympian, Johnny Quinn had a “what’s next” attitude that led him to success he had never imagined. In Push, he looks at failure as a season of life rather than a death sentence. He provides incredible insight into the “what’s next” instead of “what could have been.”

We all experience failure at some level; Quinn equips us to embrace change, accept risks, and learn to push through barriers, to live life on purpose.

Johnny Quinn is a US Olympian in bobsled and a former pro-football player spending time with the NFL’s Buffalo Bills, Green Bay Packers, and the Saskatchewan Roughriders of the CFL. He has competed on the popular TV show American Ninja Warrior. Johnny has been featured on: ABC, CNN, CBS, Good Morning America, Fox, NBC, Time, USA Today and many other media and news outlets around the world.

Johnny is an author and speaker whose mission is to inspire others through thought-provoking material, both written and spoken. He has worked with companies including Chick-Fil-A, Trane, Liftmaster, BMW, and Zillow. Johnny, his wife Amanda and their daughter Amelia Rose reside in McKinney, Texas.