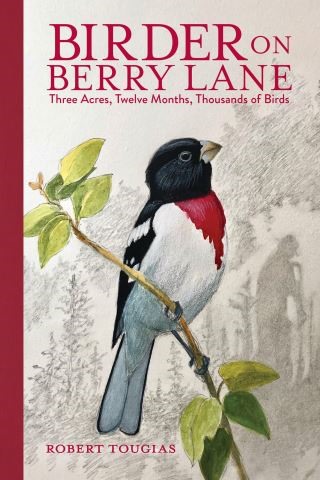 “Birder on Berry Lane weaves a remarkably rich tapestry, describing many birds’ lives around a single place and showing just how connected to them we can become. Robert Tougias proves that if we look, we can see so much more than we think, even in our own backyards.” Brian Sullivan
eBird project leader, Cornell University
Author of Better Birding—Tips, Tools, and Concepts for the Field

A month-by-month guide to the birds that flock to the peaceful New England backyard of a noted writer, birder, and naturalist.
Robert Tougias's house on Berry Lane may look like a typical Connecticut suburban home, but as his fascinating year-long account reveals, its three-acre backyard is teeming with nature's mysteries. Acutely sensitive to the activities of birds, Tougias notes which species are present, which are breeding, and where their nests are. He identifies each species by its song, and brings us on a journey of appreciation as we learn the wonders of bird migration, the sensitive interaction of birds with their habitat, and the hidden meaning of their call notes and songs.

Intimate and acutely observed writing reveals the miracles of the ordinary in the subtle changes, season to season, of the ecosystem of the woods, streams, and meadow that make up the sprawling backyard on Berry Lane. We are led to consider, too, the dangers posed by the climate crisis and unthinking human development. The quietly powerful writing tunes our senses to the change of the seasons, the return of warblers in spring, geese flying south in the fall--all happening on time as they have for eons.

Beautifully illustrated with twenty-five line drawings, Birder on Berry Lane is a book of sublime simplicity that teaches an appreciation for what we commonly overlook.

Robert Tougias: Robert Tougias is the author of Birding Western Massachusetts and The Quest for the Eastern Cougar and writes nature articles for publications throughout the country. His column "Bird's Eye View" appears regularly in the New London Day Newspaper. He received his education in natural resources at the University of Massachusetts and has worked for the Massachusetts Audubon Society and the US Department of Agriculture. He lives in rural Connecticut with his daughter and their dog, Zoey.