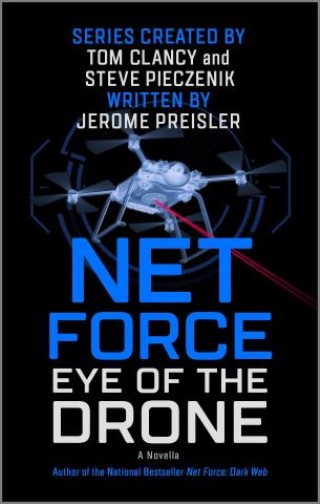 Net Force: Eye of the Drone

In Munich, a renowned computer scientist dies. Then, his daughter vanishes. Both under mysterious circumstances.

Kali Alcazar, a master hacker, wants to know why. As she delves deeper into the suspicious events, she spots something in the sky — a rare, advanced drone -- and realizes she’s a target herself. A group of mercenary assassins has been assembled with just one goal: to stop Kali from exposing a dark, world-changing secret. Stop her at any cost.

They’re not the only ones who are hunting Kali. CIA manhunter Mike Carmody and his elite special ops team are hot on her trail. Their task—bring her to Washington as an internationally wanted cyber-criminal. But that simple mission suddenly becomes a lot more dangerous than they bargained for.

In this thrilling novella, the lines blur between hunter and hunted in a battle for tech dominance whose explosive outcome ultimately may be decide the future of international security.

Jerome Preisler: Jerome Preisler is the prolific author of almost forty books of fiction and narrative nonfiction, including all eight novels in the New York Times bestselling TOM CLANCY'S POWER PLAYS series. His latest book is DARK WEB, the first novel in a relaunch of the New York Times bestselling NET FORCE series co-created Tom Clancy and Steve Pieczenik. Forthcoming in May 2020 is the enovella NET FORCE: EYE OF THE DRONE. Jerome lives in New York City and coastal Maine.