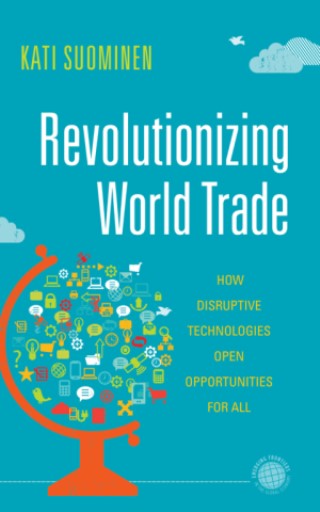 How Disruptive Technologies Open Opportunities for All

Almost 15 years ago, in The World is Flat, Thomas Friedman popularized the latest wave of globalization as a world of giant corporate supply chains that tripled world trade between 1990 and 2010. Major corporations such as Apple, Dell, and GE offshored manufacturing to low-cost economies; China became the world's factory, mass-producing and exporting computers and gadgets to Western shoppers. This paradigm of globalization has dominated global trade policy-making and guided hundreds of billions of dollars in business investments and development spending for almost three decades.

But we are now on the cusp of a new era. Revolutionizing World Trade argues that technologies such as ecommerce, 3D printing, 5G, the Cloud, blockchain, and artificial intelligence are revolutionizing the economics of trade and global production, empowering businesses of all sizes to make, move, and market products and services worldwide and with greater ease than ever before. The twin forces of digitization and trade are changing the patterns, players, politics, and possibilities of world trade, and can reinvigorate global productivity growth. However, new policy challenges and old regulatory frameworks are stifling the promise of this most dynamic, prosperous, and inclusive wave of globalization yet. This book uses new empirical evidence and policy experiences to examine the clash between emerging possibilities in world trade and outdated policies and institutions, offering several policy recommendations for navigating these obstacles to catalyze growth and development around the world.

Kati Suominen: Kati Suominen is Founder and CEO of Nextrade Group, a Los Angeles-based data and analytics company that helps governments, multilateral development banks, and Fortune 500s enable world trade through technology. She has ideated and built dozens of data and analytics products to understand and solve challenges to world trade and digitization, and ideated and built seven global initiatives and public-private partnerships to further ecommerce development and digitization of world trade. She is the author and editor of ten books on trade and economics, notably Revolutionizing World Trade: How Disruptive Technologies Open Opportunities for All (Stanford University Press, 2019), Peerless and Periled: The Paradox of America's Leadership in the World Economic Order (Stanford University Press, 2012) and Globalization at Risk: Challenges to Finance and Trade (Yale University Press, 2010, one of Foreign Affairs' best international affairs books of the year). She serves as Adjunct Fellow at the Center for Strategic and International Studies (CSIS), where she cofounded the Digital Trade program, and Adjunct Professor at the UCLA Anderson School, where she teaches MBA courses on international business economics and the economics of global digital disruption. She is Life Member of the Council on Foreign Relations.