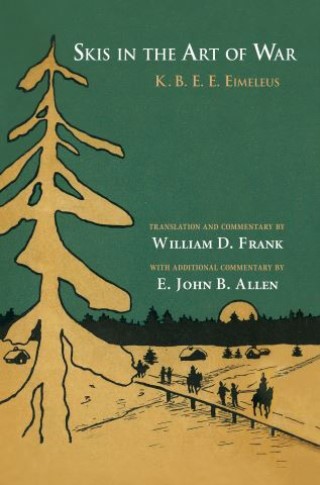 Skis in the Art of War

K. B. E. E. Eimeleus was ahead of his time with his advocacy of ski training in the Russian armed forces. Employing terminology never before used in Russian to describe movements with which few were familiar, Skis in the Art of War gives a breakdown of the latest techniques at the time from Scandinavia and Finland. Eimeleus's work is an early and brilliant example of knowledge transfer from Scandinavia to Russia within the context of sport.

Nearly three decades after he published his book, the Finnish army, employing many of the ideas first proposed by Eimeleus, used mobile ski troops to hold the Soviet Union at bay during the Winter War of 1939–40, and in response, the Soviet government organized a massive ski mobilization effort prior to the German invasion in 1941. The Soviet counteroffensive against Nazi Germany during the winter of 1941–42 owed much of its success to the Red Army ski battalions that had formed as a result of the ski mobilization.

In this lucid translation that includes most of the original illustrations, scholar and former biathlon competitor William D. Frank collaborates with E. John B. Allen, known world-wide for his work on ski history.

K. B. E. E. Eimeleus (Carl Bror Emil Aejmelaeus-Äimä) served at the highest levels of the Finnish government after independence until his death in 1935.

William D. Frank is the author of Everyone to Skis! Skiing in Russia and the Rise of Soviet Biathlon. His articles have appeared in The Boston Globe, The Journal of Sport History, Ski History Magazine and Pacific Northwest Quarterly.

E. John B. Allen is author of numerous articles, films, and books, including From Skisport to Skiing and Culture and Sport of Skiing from Antiquity to World War II.