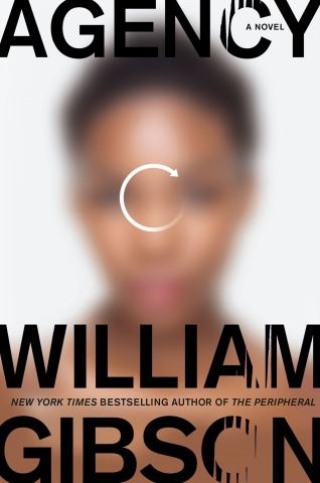 “ONE OF THE MOST VISIONARY, ORIGINAL, AND QUIETLY INFLUENTIAL WRITERS CURRENTLY WORKING”* returns with a sharply imagined follow-up to the New York Times bestselling The Peripheral.

William Gibson has trained his eye on the future for decades, ever since coining the term “cyberspace” and then popularizing it in his classic speculative novel Neuromancer in the early 1980s. Cory Doctorow raved that The Peripheral is “spectacular, a piece of trenchant, far-future speculation that features all the eyeball kicks of Neuromancer.” Now Gibson is back with Agency—a science fiction thriller heavily influenced by our most current events.

Verity Jane, gifted app whisperer, takes a job as the beta tester for a new product: a digital assistant, accessed through a pair of ordinary-looking glasses. “Eunice,” the disarmingly human AI in the glasses, manifests a face, a fragmentary past, and a canny grasp of combat strategy. Realizing that her cryptic new employers don’t yet know how powerful and valuable Eunice is, Verity instinctively decides that it’s best they don’t.

Meanwhile, a century ahead in London, in a different time line entirely, Wilf Netherton works amid plutocrats and plunderers, survivors of the slow and steady apocalypse known as the jackpot. His boss, the enigmatic Ainsley Lowbeer, can look into alternate pasts and nudge their ultimate directions. Verity and Eunice are her current project. Wilf can see what Verity and Eunice can’t: their own version of the jackpot, just around the corner, and the roles they both may play in it.

William Gibson: William Gibson is credited with having coined the term "cyberspace" and having envisioned both the Internet and virtual reality before either existed. He is the author of Neuromancer, Count Zero, Mona Lisa Overdrive, Burning Chrome, Virtual Light, Idoru, All Tomorrow's Parties, Pattern Recognition, Spook Country, Zero History, Distrust That Particular Flavor, and The Peripheral. He lives in Vancouver, British Columbia, with his wife.