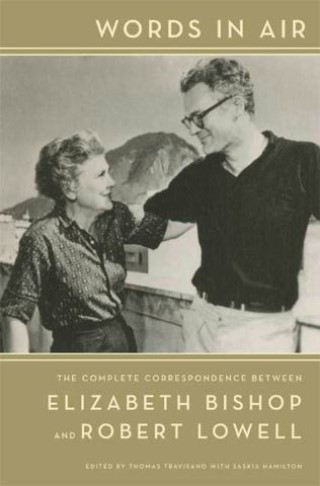 The Complete Correspondence Between Elizabeth Bishop and Robert Lowell

Robert Lowell once remarked in a letter to Elizabeth Bishop that "you ha[ve] always been my favorite poet and favorite friend."

The feeling was mutual. Bishop said that conversation with Lowell left her feeling "picked up again to the proper table-land of poetry," and she once begged him, "Please never stop writing me letters—they always manage to make me feel like my higher self (I've been re-reading Emerson) for several days." Neither ever stopped writing letters, from their first meeting in 1947 when both were young, newly launched poets until Lowell's death in 1977.

Presented in Words in Air is the complete correspondence between Bishop and Lowell. The substantial, revealing—and often very funny—interchange that they produced stands as a remarkable collective achievement, notable for its sustained conversational brilliance of style, its wealth of literary history, its incisive snapshots and portraits of people and places, and its delicious literary gossip, as well as for the window it opens into the unfolding human and artistic drama of two of America's most beloved and influential poets.

Elizabeth Bishop: The modern American poet Elizabeth Bishop (1911-79) received the Pulitzer Prize in 1956 for her collection Poems: North & South. A Cold Spring, the National Book Award for The Complete Poems (1969), the National Book Critics' Circle Award in 1976, and many other distinctions and accolades for her work. She was born in Worcester, Massachusetts. She traveled widely as an adult, living for years in France and then Brazil, before returning to the United States.|||Robert Lowell (1917-1977) was the renowned and controversial author of many books of poetry, including Day by Day, The Dolphin, and History. FSG also published his Collected Prose in 1987.

Elizabeth Bishop (1911–79) and Robert Lowell (1917–77) were among the greatest and most honored poets of the last century. Their poetry, prose, and letters are published by FSG.