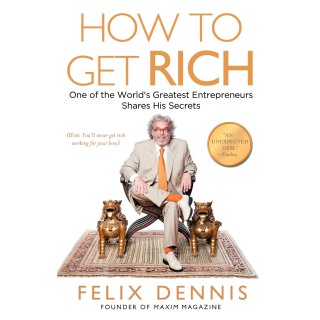 How to Get Rich

One of the World's Greatest Entrepreneurs Shares His Secrets

Felix Dennis is an expert at proving people wrong. Starting as a college dropout with no family money, he created a publishing empire, founded Maxim magazine, made himself one of the richest people in the UK, and had a blast in the process.

How to Get Rich is different from any other book on the subject because Dennis isn't selling snake oil, investment tips, or motivational claptrap. He merely wants to help people embrace entrepreneurship, and to share lessons he learned the hard way. He reveals, for example, why a regular paycheck is like crack cocaine; why great ideas are vastly overrated; and why "ownership isn't the important thing, it's the only thing."

Felix Dennis: Felix Dennis is the chairman of Dennis Publishing, which publishes The Week among many other magazines. He was the founder of Maxim, one of the most successful new magazines of the last decade. He has written several volumes of poetry that have been performed live onstage by the Royal Shakespeare Company. His other interests include breeding rare pigs, drinking French wine, collecting first edition books, and avoiding business meetings. He has homes in London, Stratford-upon-Avon, New York City, Connecticut, and the Caribbean island of Mustique.