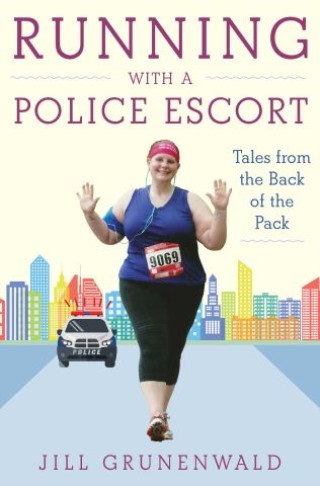 Running with a Police Escort

Tales from the Back of the Pack

In the fall of 2012, quirky and cat-loving Cleveland librarian Jill Grunenwald got an alarming email from her younger sister: her sister was very concerned with Jill’s weight and her overall mental and physical health. Having always struggled with her weight, Jill was currently hitting the scales at more than three hundred pounds. Right then, Jill looked in the mirror and decided that she needed to make a life-style change, pronto. She enrolled in Weight Watchers and did something else that she—the girl who avoided gym class like the plague in high school—never thought she’d do; Jill started running. And believe it or not, it wasn’t that bad. Actually, it was kind of fun.

Three months later, Jill did the previously unthinkable and ran her very first 5k at the Cleveland Metropolitan Zoo. Battling the infamous hills of the course, Jill conquered her fears and finished—but in dead last. Yep, the police were reopening the streets behind her. But Jill didn’t let that get her down—because when you run for your health and happiness, your only real competition is yourself.

Six years and more than one hundred pounds lost later, Jill is still running and racing regularly, and she is a proud member of the back of the pack in every race that she has entered. In this newly updated edition Running with a Police Escort, Jill chronicles her racing adventures, proving that being a slow runner takes just as much guts and heart as being an Olympic champion. At turns heartbreaking and hilarious, Running with a Police Escort is for every runner who has never won a race but still loves the sport.

Jill Grunenwald: Jill Grunenwald is the healthy living blogger behind The Year of the Phoenix and host of the Running with a Police Escort podcast, which she launched in June 2015 thanks to the financial support of her Kickstarter backers. A 3x half-marathoner, Jill proudly represents the back of the pack at every race and was an Ambassador for the Cleveland Marathon series in 2015, 2016, and 2017. She has her BFA from Bowling Green State University and her MLIS from the University of Kentucky. Currently, she is employed as a staff librarian at OverDrive, the leading ebook and audiobook app for libraries and schools, where she is also the creator and co-host of the Professional Book Nerds podcast. She lives and works in Cleveland.