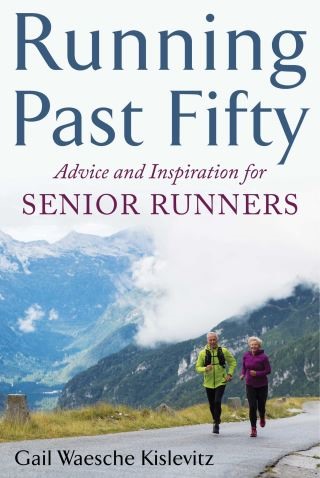 Advice and Inspiration for Senior Runners

Running brings joy and health benefits to all participants, especially those of the baby boomer generation. But when legs get sore, joints feel achy, and old age creeps up, sometimes senior runners need a little extra motivation to get out of the door and on the road. In Running Past Fifty, lifelong runner Gail Waesche Kislevitz provides helpful tips and motivation from thirty-six runners aged fifty or older.
Presenting time-tested recommendations, Kislevitz interviews some of the nation’s greatest senior runners. Included here are exclusive interviews with greats such as Ed Whitlock, who, at the age of eighty-five, set an age-division world record of 3:56 in the marathon; Bill Rodgers, winner of four Boston Marathons and four New York City Marathons; George Hirsch, chairman of New York Road Runners; Olympian and author Jeff Galloway; world record holder Sid Howard; and runner and women’s pioneer runner and advocate Kathrine Switzer
And legendary runners aren’t the only ones running well into seniority. Kislevitz also offers motivational stories from average runners who hit the pavement frequently and refuse to let their age stop them from competing regularly.
Baby boomer runners may be slower than they once were, but they show no signs of slowing down. Inspiring and insightful, Running Past Fifty is the perfect read for every one of them.

Gail Waesche Kislevitz: Gail Waesche Kislevitz is an award-winning journalist and the author of six books on running and sports. She was a columnist for Runner’s World for fifteen years and her freelance work has appeared in Shape, Marathon and Beyond, and New York Runner. A longtime employee of New York Road Runners, she is a coach for their marathon charity team, Team for Kids. Kislevitz has run twenty-six marathons, and has competed in triathlons, including a Half Ironman. In 2006, she was awarded the RRCA Journalist Excellence Sportswriter Award. Kislevitz lives in Ridgewood, New Jersey.Amby Burfoot won the Boston Marathon in 1968 and joined Runner's World ten years later. He became executive editor in 1985, and he held the position for twenty years before retiring in 2013. Amby has run 110,000 miles in his lifetime and owns the US's longest active "race road streak," having completed the Thanksgiving Day 5-mile run in Manchester, Connecticut, fifty-five years in a row. Currently a writer at-large for Runner's World, he has been honored by numerous running organizations both as an athlete and as a writer. Now in his early seventies, he continues running up to thirty miles a week.