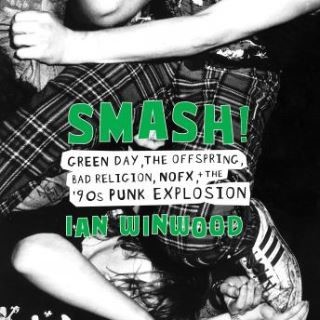 Two decades after the Sex Pistols and the Ramones birthed punk music into the world, their artistic heirs burst onto the scene and changed the genre forever. While the punk originators remained underground favorites and were slow burns commercially, their heirs shattered commercial expectations for the genre. In 1994, Green Day and The Offspring each released their third albums, and the results were astounding. Green Day's Dookie went on to sell more than 15 million copies and The Offspring's Smash remains the all-time bestselling album released on an independent label. The times had changed, and so had the music.

While many books, articles, and documentaries focus on the rise of punk in the '70s, few spend any substantial time on its resurgence in the '90s. Smash! is the first to do so, detailing the circumstances surrounding the shift in '90s music culture away from grunge and legitimizing what many first-generation punks regard as post-punk, new wave, and generally anything but true punk music.

With astounding access to all the key players of the time, including members of Green Day, The Offspring, NOFX, Rancid, Bad Religion, Social Distortion, and many others, renowned music writer Ian Winwood at last gives this significant, substantive, and compelling story its due. Punk rock bands were never truly successful or indeed truly famous, and that was that -- until it wasn't. Smash! is the story of how the underdogs finally won and forever altered the landscape of mainstream music.

Ian Winwood: Ian Winwood is one of the world's foremost music writers. He has written for Rolling Stone, the Guardian, Mojo, Kerrang!, and the BBC, and is the coauthor, alongside Paul Brannigan, of Birth School Metallica Death and Into the Black. Winwood resides in London.