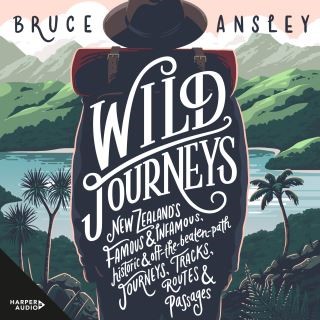 Discover a world of wild, mysterious and audacious journeys In Wild Journeys Bruce Ansley retraces the path of the doomed surveyor John Whitcombe across the Southern Alps, follows the raiding party of the northern chief Te Puoho along the West Coast, sails around New Zealand's northern and southern capes; walks through the Valley under the Two Thumb Range to the mythical Mesopotamia; drives from Waiheke to Wanaka (in a hurry), sets off on a hunt for the South Island's Grey Ghost, looks deep into the heart of volcanic New Zealand and tracks our most unlikely hero, the prison escaper George Wilder.

Bruce Ansley is one of New Zealand's pre-eminent storytellers. For more than two decades he was a writer for New Zealand Listener, before becoming a full-time author in 2007. He has held fellowships at Oxford and Cambridge Universities, and has won a number of journalism awards. He is author of ten books, including Coast: A New Zealand Journey which won Best Illustrated Non-fiction Book at the New Zealand Post Book Awards in 2014. His other books include A Fabled Land: The Story of Canterbury's Famous Mesopotamia Station and Wild Roads: A New Zealand Journey.

He loves tramping and has roamed the South Island's back country. For many years he lived in a tiny traditional bach in Golden Bay, and once built a house in the far reaches of Pelorus Sound. He has worked as a commercial fisherman in Fiordland and as a deer farmer on Banks Peninsula, but has also called each of the four main cities home. On a good day he can usually be found out on the water in his Norwegian motor sailer, but his favourite occupation is simply poking around New Zealand, which he regards as the wildest, most beautiful, most romantic country in the world.

Ansley has three sons and lives with his wife Sally on Waiheke Island.