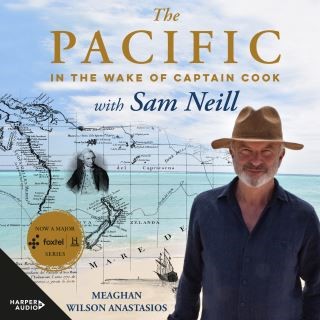 In the Wake of Captain Cook, with Sam Neill

A rich, complex and engaging account of Cook's voyages across the Pacific, from actor and raconteur Sam Neill.

Captain James Cook first set sail to the Pacific in 1768, just over 250 years ago. These vast waters, one third of the earth's surface, were uncharted but not unknown. A rich diversity of people and cultures navigated, traded, lived and fought here for thousands of years. Before Cook, the Pacific was disconnected from the power and ideas of Europe, Asia and America. In the wake of Cook, everything changed.

The Pacific with Sam Neill is the companion book to the Foxtel documentary series of the same name, in which actor and raconteur Sam Neill takes a deeply personal, present-day voyage to map his own understanding of James Cook, Europe's greatest navigator, and the immense Pacific Ocean itself.

Voyaging on a wide variety on vessels, from container ships to fishing trawlers and sailing boats, Sam crosses the length and breadth of the largest ocean in the world to experience for himself a contemporary journey in Cook's footsteps, engaging the past and present in both modern and ancient cultural practice and peoples.

Fascinating, engaging, fresh and vital - this is history ... but not as you know it.

Meaghan Wilson Anastasios: Meaghan Wilson Anastasios holds a PhD in art history and cultural economics and has been a lecturer at the University of Melbourne. She is also a researcher and writer for film and TV, including the upcoming Foxtel series Uncharted with Sam Neill, as well as Shane Delia's Spice Journey: Turkey and Gourmet Farmer Afloat. She co-wrote the bestselling historical novel The Water Diviner, based on the script for the film of the same name starring Russell Crowe. She has written for The Age and Gourmet Traveller, and is a regular commentator in the media on art market issues.