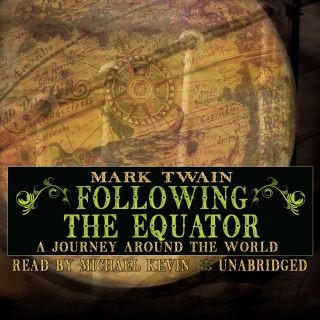 A Journey Around the World

Bound on a lecture trip around the world, Mark Twain turns his keen satiric eye to foreign lands in Following the Equator. This vivid chronicle of a sea voyage on the Pacific Ocean displays Twain’s eye for the unusual, his wide-ranging curiosity, and his delight in embellishing the facts. The personalities of the ship’s crew and passengers, the poetry of Australian place names, the success of women’s suffrage in New Zealand, an account of the Sepoy Mutiny, and reflections on the Boer War as an expression of imperialistic morality, among other topics, are the focus of his wry humor and redoubtable powers of observation. Following the Equator is an evocative and highly unique American portrait of nineteenth-century travel and customs.

Mark Twain (1835–1910) was born Samuel L. Clemens in the town of Florida, Missouri. One of the most popular and influential authors our nation has ever produced, his keen wit and incisive satire earned him praise from both critics and peers. He has been called not only the greatest humorist of his age but also the father of American literature.