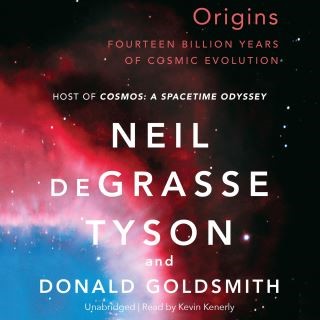 A thrilling and accessible tour of the cosmos

Our true origins are not just human, or even terrestrial, but in fact cosmic. Drawing on scientific breakthroughs and the current cross-pollination among geology, biology, astrophysics, and cosmology, Origins explains the soul-stirring leaps in our understanding of the cosmos. From the first image of a galaxy birth to Spirit rover's exploration of Mars, to the discovery of water on one of Jupiter's moons, coauthors Neil deGrasse Tyson and Donald Goldsmith conduct a galvanizing tour of the cosmos with clarity and exuberance.

Neil deGrasse Tyson is an American astrophysicist, author, and science communicator. In 2017 he became the first American to win the prestigious Stephen Hawking Medal for science communication. He is the Frederick P. Rose Director of the Hayden Planetarium at the Rose Center for Earth and Space and a research associate in the Department of Astrophysics at the American Museum of Natural History. From 2006 to 2011 he hosted the educational science television show NOVA ScienceNow on PBS, and in March 2014 he became host of the television series Cosmos: A Spacetime Odyssey, an update of Carl Sagan’s Cosmos: A Personal Voyage. Tyson has written several New York Times bestselling nonfiction books.

Donald Goldsmith is an astronomy writer in Berkeley, California, and the author of more than twenty books.