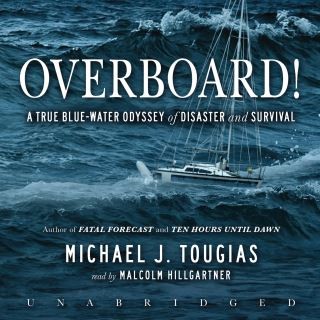 A True Blue-Water Odyssey of Disaster and Survival

In early May 2005, Captain Tom Tighe and first mate, Loch Reidy, of the sailboat Almeisan welcomed three new crew members, two men and a woman, for a five-day voyage from Connecticut to Bermuda. While Tighe and Reidy had made the journey countless times, the rest of the crew were paying-passengers learning about offshore sailing and looking for adventure. Four days into their voyage, they got adventure—but not the kind they had expected or had any training to handle. A massive storm struck, sweeping Tighe and Reidy from the boat; the remaining crew somehow managed to stay aboard the vessel as it was torn apart by wind and water. Overboard! follows the desperate struggle of the passengers and of the captain and first mate fighting for their lives in the sea.

Michael J. Tougias is the author and coauthor of twenty-three books, including Rescue of the Bounty, A Storm too Soon, Fatal Forecast, and Ten Hours Until Dawn. Tougias has written for the New York Times and several other prestigious magazines and newspapers. He is a sought-after lecturer who gives more than seventy presentations each year. He lives in Massachusetts.