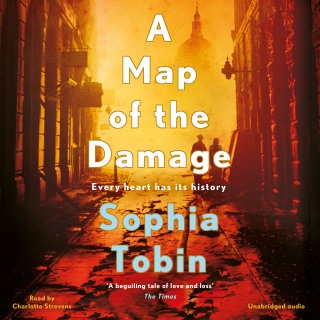 A Map of the Damage

Already a Sunday Times bestselling author with her first novel, A Map of the Damage confirms Sophia Tobin as a rising star. This is stunning historical fiction for fans of Tracy Chevalier.

London, 1941. Livy makes her way through Blitz-torn London to the Mirrormakers’ Club, the only place that makes her feels safe, where she finds herself drawn into the mystery of a missing diamond, and torn between two men with competing claims on her.

London, 1841. Charlotte is helped from the scene of an accident by a man who shows her a building he is working on, and whose kindness unlocks a hope she has long kept buried. But that man is not her husband.

Two women, a century apart, united by one place: the Mirrormakers’ Club. A building which holds echoes of past loves and hates, and hides the darkest of secrets in its foundations.

Sophia Tobin was raised in Kent. She has studied History and History of Art, and worked for a Bond Street antique dealer for six years, specialising in silver and jewellery. She currently works in a library and archive. Inspired by her research into a real eighteenth-century silversmith, Tobin began to write The Silversmith’s Wife, which was shortlisted for the Lucy Cavendish College Fiction Prize.  It was published by Simon & Schuster in 2014. Her second novel, The Widow’s Confession, was published in 2015, and her third, The Vanishing, in 2017. Tobin lives in London with her husband.