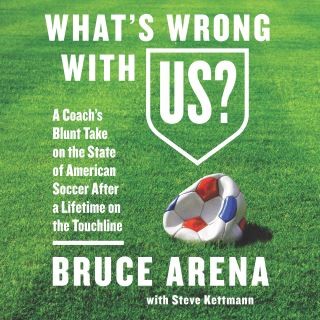 What's Wrong with US?

Every four years, Americans turn their attention to the world’s game—soccer. As recently as 1998, the USMNT merely made up the numbers at the biggest sporting tournament of all, but once Bruce Arena took over the team, American soccer started to find its footing. In the 2002 World Cup, a highly-fancied Portugal team, featuring the great Ronaldo, lost to Arena’s US team in a shock 3-2 victory, and but for a handball that wasn’t given, they could well have knocked off eventual winners Germany. But that quarter final appearance proved once and for all that the USMNT, like the women’s team before them, deserved to be considered a worthy opponent--and that’s all thanks to Bruce Arena.

When he took over the USMNT, Arena was already the most successful club team coach in US history, having led DC United to the first two championships of the fledgling MLS. Arena--known for his tactical acumen and no-nonsense approach to coaching—inspired and instilled just enough fear into his teams to make them overachieve. By 2016, however, the national team was in a funk—coach Jurgen Klinsmann had brought the team to near elimination during the qualifying rounds for Russia. Cue Arena’s return to the stage, and the team’s return to form.

Arena’s book will appear just as the team makes its final preparations for the World Cup, and at last fans will learn what makes this hugely successful coach tick. And the thousands of coaches around the country will turn to What's Wrong With Us? to see exactly how they can instill Arena’s blueprint for success on their own bands of young players.

Bruce Arena is the winningest coach in US soccer history. As head coach at the University of Virginia, he led the Cavaliers to five ACC Tournament Championships and five National Championships. Arena first became the head coach of the US Men’s National Team in 1998, is the first coach in history to win three CONCACAF Gold Cups, and has coached teams to five MLS Cup championships. A member of the National Soccer Hall of Fame, Arena has thrice been named the MLS Coach of the Year, and in 2014 he received the Werner Fricker Builder Award, the highest honor that an individual can receive from the US Soccer Federation.