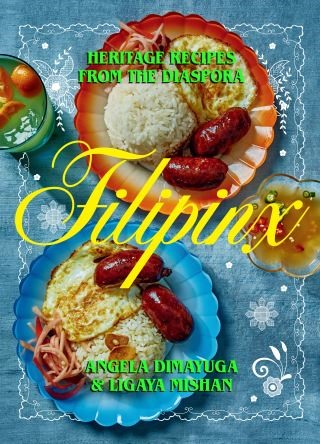 Heritage Recipes from the Diaspora

Filipinx offers 100 deeply personal recipes—many of them dishes that define home for Angela Dimayuga and the more than four million people of Filipino descent in the United States. The book tells the story of how Dimayuga grew up in an immigrant family in northern California, trained in restaurant kitchens in New York City—learning to make everything from bistro fare to Asian-American cuisine—then returned to her roots, discovering in her family’s home cooking the same intense attention to detail and technique she’d found in fine dining.

In this book, Dimayuga puts a fresh spin on classics: adobo, perhaps the Filipino dish best known outside the Philippines, is traditionally built on a trinity of soy sauce, vinegar, and garlic—all pantry staples—but add coconut milk, vinegar, and oil, and it turns lush and silky; ribeye steaks bring extra richness to bistek, gilded with butter and a bright splash of lemon and orange juice. These are the punches of flavor and inspired recipes that home cooks have been longing for.

A modern, welcoming resource for this essential cuisine, Filipinx shares exciting and approachable recipes everyone will wholeheartedly embrace in their own kitchens.