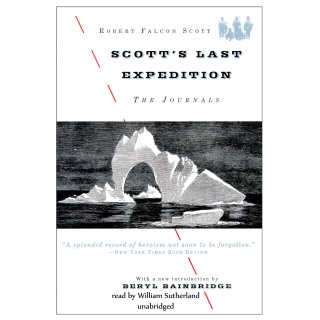 In November 1910, the vessel Terra Nova left New Zealand carrying an international team of explorers led by Robert Falcon Scott, an Englishman determined to be the first man to reach the South Pole. Scott kept a detailed journal of his adventures until March 29, 1912, when he and the few remaining members of his team met their ends in a brutal blizzard. The daily progress of the expedition toward the pole is recorded in an immensely vivid and personal narrative, depicting the beauty of the Antarctic tundra, the harsh living conditions, and Scott's own desperation to beat rival explorers to the pole.

Even in his final hours, Scott continued to make entries of his observations in his journal, allowing the adventure he and his fellow explorers undertook to live on once discovered.

Robert Falcon Scott (6 June 1868–29 March 1912) was a British Royal Naval officer and explorer who led two expeditions to the Antarctic regions: the Discovery Expedition, 1901–04, and the ill-fated Terra Nova Expedition, 1910–13. During this second venture, Scott led a party of five to the South Pole on 17 January 1912, only to find that they had been preceded by Roald Amundsen's Norwegian party in an unsought “race for the Pole”. On their return journey, Scott and his four comrades all perished because of a combination of exhaustion, hunger, and extreme cold.